How to Get Your Kid into College Without Really Trying 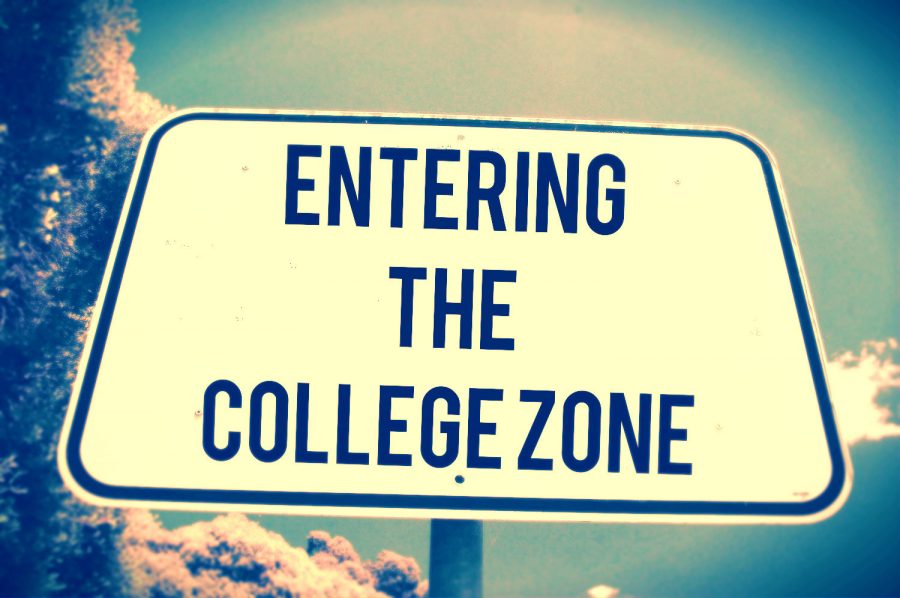 Are you at that stage of life where you’re focused on how to get your kid into college without really trying? Or maybe without managing to lose your mind in the process? Join the club. I decided to write about this journey as a series of articles, since I have a feeling that I’m not the only parent walking this path and figuring it out as I go along.

So how do I get my kid into college? The reality is that what I’m really doing is helping my daughter get herself into college, as I nudge her along. Being a Junior in high school means that this is a big year for her. I’ve been thinking about this and crying about it lots. Not because she might not get what she wants, but because she’s going to be leaving soon. And if you’re in that boat, too, you know exactly what I mean. We are all pretty much saps when it comes to our kids, and as challenging as this parenting business can be, when confronted with the reality that they are soon to fly the nest, that presents a whole different life that we’re all going to have to get accustomed to.

This is a massively stressful year. Stressful for my daughter who is focusing on her grades, taking the SAT and the ACT, getting ready for her IB testing, and researching the best schools to attend for what she thinks she’d like to do with her life and career. And it’s equally stressful for me, as I worry about whether she’ll get into the schools she most wants to attend, where it is (and how far away) the school she’ll ultimately decide on will be, and not the least of which, how I’ll afford to pay for it all.

The Fear of How to Pay for College

I know I’m not alone when it comes to the fear of how to pay for college—that magic trick that I’m apparently going to pull out of my ass. I know I’m not the first person, or the only person out there thinking about this at this very moment. After much contemplation, have come to this conclusion: She can go to any school she wants, as long as she gets a scholarship and as long as it’s a situation where I only have to pay a certain amount each year.

I came to this decision about financing college for my daughter because it will be equivalent to the sum I was paying for private school tuition for my son, who will be moving to public school for high school. That money, the money I’ll no longer be spending on private school tuition, will now be able to be diverted to my daughter’s college tuition expense. And it will also be fair. What I do for one, I’m trying to do for the other, which seems about right. While this strategy makes perfect sense to me, in my heart, I also know this to be true—(unless she goes to the University of Texas which is an in-state option), these days, even the public universities cost about the same as the private colleges in the end.

How I am Getting My Kid into College

So, how am I getting my kid into college? The answer is simple: I’m not. I take that back. I have done a lot to help advise and educate along the way. But the truth is that she has some pretty lofty, and perhaps even some pretty unrealistic, goals. As her parent, I feel the best thing I can do for her is to make her drive this train herself. I believe with all my heart that parenting isn’t about making life easy for your kids. It’s about infinitely much more. It’s about teaching them about the realities of life, what kind of effort is involved in reaching your goals and realizing your dreams, and that Mom, as much as she might love you, can’t (and shouldn’t) do it all for you.

So, here’s what I’ve done to help with this college prep process to date:

• I have a tutor come every week to help prep for the ACT and SAT. This guy, who rocks, also helps her with physics and calculus too.
• I bought her The Complete Book of Colleges at the beginning of September. I don’t know how many times she has actually opened The Complete Book, but I suspect I’ve opened it more than she has. That’s her problem, not mine. And yes, I tell myself that often.
• I’ve spent many hours and talked with a number of people I respect and trust on this topic, and take the subject very, very seriously. I suspect that I might take it more seriously at this point than my daughter does.
• I have paid for her to take a practice ACT, because it seems as though more kids take the ACT today than the SAT.
• I have made sure she has gone to two college nights at her school in order to meet and talk with college representatives.
• I signed her up for the SAT in March and the ACT in April.
• I have dragged her (yes, I really did have to drag her) to a college information night at her high school. She Instagrammed and Snapchatted her way through that evening, while I took copious notes.
• I have asked her for a list of colleges she wants to visit and researched how to get there without spending a bazillion dollars.
• I have talked to parents whose kids are going to schools she says she is interested in.

Bottom line, I realized after investing a great deal of time, effort, energy, and emotion into this process that I can’t be more invested in getting her into college than she is. And so far, it’s pretty clear that that’s where we stand. So I made a decision: I’m not doing it. I can’t, and shouldn’t, get my kid into college—she’s going to have to want it, and she’s going to have to do this work herself.

Why I Drew the Line

I think it’s important to know as part of my story that I have a daughter who wants to go to the best college (whatever that might be on any given day), but her interest and her follow through is far from “the best.” I want the best for her as well. I want her to go any college she can get into with a scholarship. Even better, I’m confident in her and her abilities. I know that she can get into the best colleges. She’s super smart, she has great grades, and there’s every reason she should be able to accomplish getting into one of the schools she ultimately decides she’d like to attend. But whether it’s her lack of self-confidence or lack of motivation, something is getting in her way. And I can’t fix those things—she’s going to have to do that.

I am not that parent. You know the kind, and I’m not it. I’m not going to micromanage every part of my kid’s life. And I’m certainly not going to step in for a kid who can’t manage the interest or the desire to do it herself, filling out applications and making sure that the essays are written, and that scholarship applications are completed and submitted. That’s not real life, it’s not fair to me, and that’s not how it should work. These are things she should do because she passionately wants to accomplish something—getting into the school of her choice.

Along with that decision, I also made another decision. It’s one that I feel guilty about, but feel it was necessary.

As I was researching how to take my daughter to visit the schools that are her top picks, (most of which I pointed out to her), I was looking at the cost of it all and wondering how I was going to swing it. How many more hours in the day are there to work? At some point, I realized I was going to drop dead from exhaustion and/or the stress of it all. After much soul-searching, I came to the realization that I would take her to visit schools, but that I would not take her to visit any college until I saw concrete action on her part that showed she was seriously interested.

What does “seriously interested” mean? Great question. It means that she has applied in full, and in some cases gotten accepted, before we go trekking off across the country. As with any parenting decision, of course I have ample opportunity to compare how I’m approaching this to how her peers’ parents are approaching this. Her friends are spending their weekends trekking across the country, visiting school after school after school. That’s great for them, but it’s simply not going to fly in my house. That’s just not how this parent is going to roll. And I know in my heart, that as tough as this path might be (for the both of us), that in the long run, she’s going to be so much better off as a result of my making her do it herself stance on this front.

That’s it for this installment of my series: How to Get Your Kid Into College Without Really Trying (and not killing yourself in the process). Is this something you’re going through as well? I’d love to hear your thoughts on this one—as well as how you’re managing to stay sane.