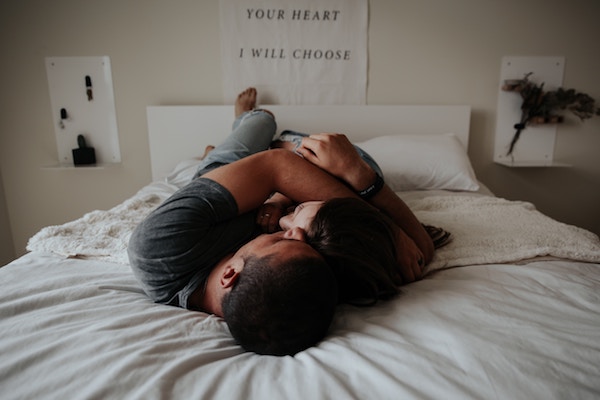 Not everyone has someone to have sex with on the regular. And, yes, that includes me. It’s a sad situation, because for those of us who aren’t getting laid with any great consistency, we might be missing out on some pretty doggone awesome chemical experiences. Post-coital bliss is what I want to talk about today. Post-coital bliss is for darn sure a real thing, and it is absolutely something we should be talking about a whole lot more than we currently are. So let’s do that.

To understand why post-coital bliss feels so good, we have to first understand the chemistry of sex. The chemicals your body puts out before you have sex, while you are in the actual act of making love, and then what happens chemically after the sex act are very different and they affect you differently, both body and mind.

Another thing that’s important to note, even though the orgasm plays a major role in sex play, It’s not just the orgasm that is responsible for all these feel-good hormones. We are talking about the entire package of touching, kissing, feeling, sensing, enjoying…you get the picture.

So, let’s break it down and look at what happens before, during, and after sex and then why post-coital bliss is not only a real thing, but why it’s a really important thing.

When you meet someone, no matter how you identify or who you are attracted to, there is either chemistry or there’s no chemistry. But what defines that spark? And, where does it come from. Is it in our heads, our DNA, or our bodies?

The correct answer is: All of the above. But research has shown that people tend to form both friendship and romantic chemistry with others who have theses core character traits:

There’s one additional piece of this puzzle that’s critically important—that’s the hormone part. When you feel attraction and chemistry, there is a biologic reaction in your body. For men, it’s a rush of testosterone. For women, it’s a bit more complex. It starts in our brains in our limbic system, or emotional center (I know, none of you are shocked by this), which sends dopamine down to our nether regions. As a result, our hearts start to beat faster, blood pressure rises, and we breathe faster. All of this happens, in both men and women, within seconds. Oh, and by the way, we get dopamine from eating our favorite foods, getting compliments, and anything else that makes us happy.

Now let’s talk about sex. You knew I was getting to that, right? Some of this we already know, even if it’s been awhile since we’ve experienced sex. It’s not exactly something a person forgets. So it’s happening. Sex. And now that blood flow that is surging through your body is accompanied by nitric oxide, which causes everything to swell. The dopamine has a friend, epinephrine, which is the adrenal hormone, to carry it along and help those muscles get ready for the great orgasm.

As, I said, we know all that great sex usually means it results in amazing orgasm(s). But here’s something you might not know. Sex is actually good for you! Sex boosts your immune system, and it also has an impact confidence and creativity. There was another research study done that showed that people having sex once or twice a week had a 30% increase in immunoglobulin A, which strengthens immunity.

As your body gets closer to orgasm, yes, we are still talking just great coitus people, your hypothalamus releases oxytocin and increases dopamine. Why is oxytocin good? Oxytocin wipes out cortisol, the major stress hormone, and we all have some of that we need to get rid of.

That feeling you have of being all gooey and totally satisfied isn’t just because you areall gooey and totally satisfied. That feeling of post-coital bliss is real, and it’s because of all the amazing things happening in your body. At climax, the body releases both serotonin and DHEA. Serotonin is a neurotransmitter that regulates mood and makes you feel peaceful, happy, and hopeful. DHEA has antidepressant effects and boosts immunity—and there’s nothing bad about that! So it’s pretty clear: The more sex you have, the less depressed you’ll feel! Also, the endorphins that are released during an orgasm closely resemble morphine, which effectively relieves pain.

But before we get too focused on post-coital bliss and develop a plan to get ourselves more of that, there are some things we need to be wary of, my ladyfriends. Love feels good. Whether it’s real love or post-coital bliss and the ‘OMG, I just had amazing sex love.’ That’s because even though it sounds (and is) pretty wonderful, this post-coital bliss can also be deceptive. The oxytocin that’s released during sexfloods your post-coital body. Oxytocin then results in an increase in dopamine which is what ultimately leads an individual to desire more permanent bonds with another person. Or at least think they do. These hormones act as neurotransmitters in the brain and result in the creation of a feeling of trust, which in ‘new’ relationships or the occasional hookup, is largely unearned. In other words, oxytocin experienced as part of post-coital bliss is actually the mind playing tricks on you. And other romantic things that happen after sex, like cuddling, hugging, or kissing can further boost oxytocin levels in the body.

Something else to note, the lateral orbitofrontal cortex actually shuts down during an orgasm. Why is this important? Because this is the part of the brain that is your voice of reason and controls your behavior. In other words, during a state of post-coital bliss, you might feel emotions that aren’t what you think they are because your ability to reason has literally left the building.

Pretty fascinating stuff, isn’t it? If you want to know more, here’s an interesting (and short) video called The Chemistry of Love narrated by Abigail Walsh, a professor of Psychology at Georgetown University.

Sex is a topic of interest to just about everyone. People who are having the sex, and people who are studying the sex. And there’s new research on the topic of post-coital bliss all the time—it only makes sense—who doesn’t want to know the whats and the whys of something so awesome.

Know that I so did not mean to throw a bucket of ice water on the goodness that is involved in a nice roll in the hay and all the post-coital bliss that results. But as a single woman who is making her way through the hell that is online dating, it only makes sense that I think about eventual bliss potentially coming my way, post-coital bliss or otherwise.

But the important thing is this: If you doget the chance to experience bliss, pre-coital, during-coital, and post-coital, enjoy the hell out of it. Just remember not to make any rash decisions in that post-coital bliss stage because what you’re feeling in those moments can’t be trusted. Not yet, anyway.

If you want a deeper dive on this topic, here are some articles that you might enjoy. On the “chemistry” of love, Psychology Today’s Relationship Chemistry: Can Science Explain Instant Connectionsis a really interesting read. Another set of good reads is also from Psychology Today, these from Dr. Linda Young called Intense Sexual Chemistry, Part 1and Intense Sexual Chemistry, Part 2.

These are all three worth your time to explore in the event you’d like help keeping your wits about you when trying to figure out if what you’re feeling is real or in the post-coital bliss moment real. And don’t worry, you don’t need to figure this out while you’re experiencing the post-coital bliss business. Wait until you get home.

Other resources on this topic:

Follow These Tips to Get Back in the Dating Scene After 50
Online Dating: The Return Policy
The Social Experiment of Online Dating: And the Importance of A/B Testing