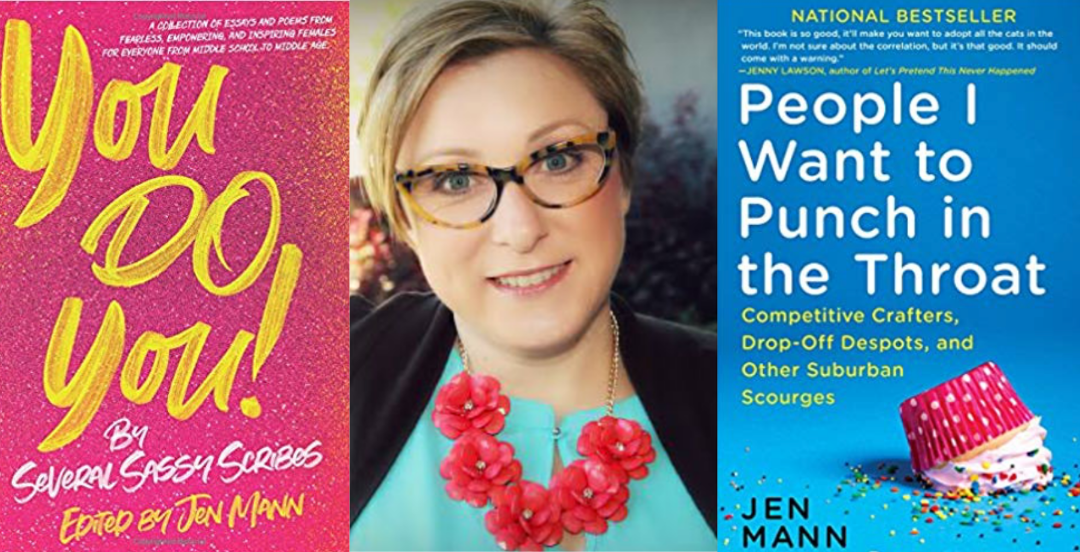 For this episode of the Middle Chicks’ Midtopia show, I interviewed Jen Mann, the New York Times bestselling author of People I Want to Punch in the Throat: Competitive Crafters, Drop-Off Despots, and Other Suburban Scourges, her breakout book. The PIWTPITT book was a Finalist for a Goodreads Readers’ Choice Award and the beginning of a series that touched the hearts and the funny bones of parents everywhere. Described by many as the R-rated version of Erma Bombeck because of her tendency to drop more than an occasional f-bomb, Jen is hilarious. She’s also a fellow Kansas City dweller, so we share a city and a love of the written word, are both living through the insanity of parenting tweens, and we both enjoy the hell out of being able to throw down a well-timed curse word. What more could I look for in a soulmate?

Jen’s path to being a best-selling author wasn’t a straight one, and she learned many lessons along the way. One of the quickest lessons she learned is to waste no time when opportunity lands in your lap. Little did she expect that when she wrote a random blog post about the Elf on the Shelf that it would go crazy on the internet, and that she’d end up with a million people reading it in the blink of an eye. She took on that insanity head on, and it became the foundation upon which she built her presence in the blogosphere and in the social media space, and some of the secrets she shares during the course of our interview.

Equally as good as sharing her writing secrets, Jen is wonderful about using her powers for good. As she became full on famous (my words, not hers) and a really big deal (she is!), she became passionate about using her voice and her platform to help other female writers find their voices, find their places in the world, lift them up, introduce them to others, and help them pretty much any way she can. That, my friends, is a super power.

In our interview, Jen and I talk about writing and how difficult it is to make a name for yourself as a writer and how success involves a whole lot more than just being able to write something interesting. During the course of our conversation, Jen shared insights about her own journey, which happened, as any things do, a little bit by accident and a little bit because there was a grand plan. Like many of us, that career-building involves not only trying to make sense of a work life and meet personal career goals, but also doing it while being a partner in a marriage and (trying to manage) raising a crop of children, all at the same time. And keeping everyone alive in the process.

In Jen’s latest projects, she’s focused on the concept that when the water rises, all boats rise. She’s the publisher of I Just Want to Pee Alone a series of anthologies where she has featured over 140 (and counting) female writers. Her latest book in that series is You Do You, which is a new collection with contributors ranging in age from 12 to 64. She’s incredibly passionate about using her reputation and voice to help bring the talented voices of other female writers together and give them a boost. And she practices what she preaches. Jen shared with me the process she went through to collect these contributions and what a fun and interesting process that was.

Advice for Writers: You’ve Gotta Do More Than Just Write

What’s Jen’s advice for writers? If you love to write and want to make a career out of being a writer, Jen has advice that will absolutely, positively help you—no matter what your area of focus. Start with this: Be good at things other than writing, like, marketing and networking. And if you’re a woman who, like Jen, is passionate about empowering and mentoring and helping other women, this interview will resonate with you as well. Plus, there’s just no way you can experience the beauty that is Jen Mann and not immediately fall in love with her. You’ll see.

You can watch the interview here:

or grab the podcast here (and subscribe while you’re at it!):

Either way you get to know her, you’ll soon see that Jen Mann is amazing, amazingly talented, and definitely someone you want to know.

And if you’re into great books, check out this review of Elena Ferrante’s My Brilliant Friend, written by by fledgling author (and daughter), Lola.