Hilarious Parenting Moment #247: My Tweens Preparing for their Periods 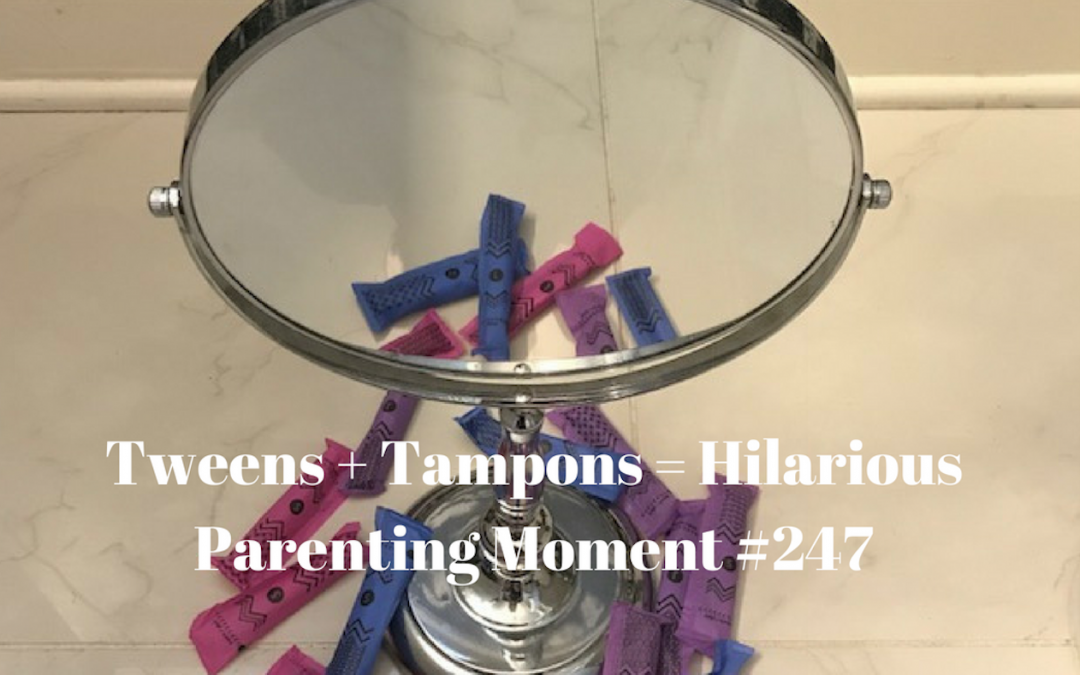 I’m the mother of four daughters, two that I managed to successfully raise to adulthood and twelve-year-old twins, so I am no stranger to parenting moments. And when you have two crops of children, some 20-some years apart, there is never a shortage of hilarity when it comes to those parenting moments—in fact, they span pretty much my entire adult life.

Speaking of insanity, I’ve been a parent since the age of 21. As a result, I have most definitely earned the title of “Girl Expert.” What that means is that I am an expert at dealing with “girl issues,” including important topics like girlfriends, fashion, hairstyles, shoes, makeup, boys, emotions, drama, and yes, even periods. However, my kids (all of them), still have the ability to surprise—and amuse me, which is actually one of the things that makes being a parent so flipping cool. You just never know what will happen next and which parenting moment will become your new favorite of all time.

Speaking of the parenting moment, the unexpected is exactly what happened recently when my tween girls, who hadn’t yet started their periods, decided they would “prepare” for when the inevitable occurs. This? It was an awesome, and hilarious, parenting moment—ranking up perhaps even in the top ten most entertaining parenting moments. On a serious note, girls at this age are very concerned about what to expect when getting their periods, so while I’m sharing a funny story from my life, do know how important it is to talk with them about their periods and prepare them in advance—it’ll happen before you know it. Now, let’s have a laugh.

One day a month or so ago, I was upstairs doing something glamorous like putting away laundry or picking up crap that no one but me ever seems to notice or mind. I heard a bunch of tween-generated noise coming from inside my master bathroom. The door was midway closed, and between serious talking, loud exclamations, and raucous laughter, something was clearly afoot. I started hearing things like “Lucy!!! There is no hole down there, you’re crazy!” and laughter. And then “I am never going to be able to do this, this is IMPOSSIBLE,” and more laughter.

It was actually a pretty hilarious parenting moment just being outside the bathroom listening to them figure out whatever they were working on figuring out, but after a few minutes, I couldn’t take it anymore, so I popped in. You guessed it—I had walked into the middle of what I like to call “The Tampon Escapades.”

There, in the middle of my bathroom floor, were two tween girls, naked from the waist down, legs spread, with a gigantic box of tampons between them, trying to figure out how to use them. Wrappers were all over the place, discarded tampons were all over the place—it was awesome. It was also perhaps one of the funniest parenting moments I’ve ever been a part of.

The trouble? Their “method of insertion” actually had nothing to do with insertion at all. In fact, it had to do with touching the tip of a tampon in the general vicinity of their pubic area, where I think they thought it would magically “do something.”

And apparently, once they opened a tampon, touched their ‘vag’ as the teen population (at my house, anyway) likes to refer to their private parts these days, they tossed it in the trash and opened a new one, ready to try all over again, still sure that something magic was gonna happen down there. 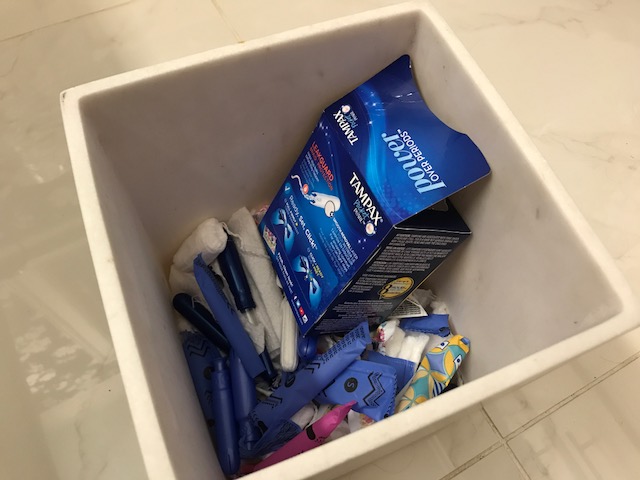 Before you get all judgy on me, let me assure you that my girls and I have had many conversations about tampons, how you use them, how you insert them, how you get them out. Including real life demonstrations on multiple occasions. They have had similar discussions with their older sisters, so they were absolutely not operating on the basis of no information. However, it seems as though on this particular instance, all information that had previously been shared with them had been totally and completely forgotten.

The Problem with “The Hole”

One tween was adamant, as I overheard from her conversation, was convinced that she did, in fact, not have a vagina, a/k/a “The Hole” and the other wasn’t so sure on that front either. As you might imagine, I am dying.

After I finished shaking my head and laughing at the circus that is my life, we had a little conversation about vaginas. It went something like this:

She: “No, Mom, there is not. I do NOT have one.”
Me: “Well, you’ve been seeing a pediatrician since the moment of birth. I can promise you that if you didn’t have a vagina, we would have known about it long before now.”
She: “Well, that might be what you think but I DO NOT HAVE A HOLE.”
Me: “Here’s what maybe you can do. Relax a little. Put your finger down there (which resulted in a massive giggling attack on the part of both girls), feel around a little, you’ll find it.”
They: “Mom, that’s gross.” (more laughing)
Me: “Well, it’s not gross. It’s your body. You should know what’s what and what’s where. And I can promise you, you DO have a vagina.”
They: “Are you really telling us that people push BABIES outta that thing? ‘Cause that’s gross, too, Mom.”

And the three of us are laughing all over again. I didn’t call this an hilarious parenting moment for nothing, you know.

Once we settled down after that laughing fit, we talked a bit about the proper way to insert a tampon and that believe it or not, if you do it correctly, you really don’t feel a thing. Let me tell you, it’s tricky trying to explain to tweens that vaginas aren’t exactly filled with tons of sensory nerves and that you can actually stick something up there and not feel it. Tough to comprehend, I know—and something they are not quite yet ready to buy into.

I grabbed two cosmetic mirrors and plopped them down, each in front of a girl. Then I said “Here’s a mirror. Check out what you’ve got down there, look in the mirror, and I can promise you’ll find your vagina. Then, once you find it, when you think you’re ready, you have to actually put the tampon applicator INSIDE your vagina, then push the plunger thingie. That’s how it gets in there.”

As you might imagine, there was much laughter as a result.

I closed the door and left them to it, and heard lots of whispering and giggling and talking and seriousness.

Mom Was Right, Maybe Pads Aren’t So Gross After All

It can, on occasion, be difficult getting a tween girl to listen to common sense, but every now and then you have a breakthrough parenting moment. I’ve tried to explain to the girls that not all women wear tampons, and especially for young girls, it’s totally fine to start out the whole period experience thing by wearing pads. Usually I get “That is SO GROSS, Mom, no way is that happening.” I also explained that there’s a reason that so many women wear tampons because, once you figure it all out, they are really a pretty convenient solution.

Thirty-six used tampons later, the girls decided that they were going to hold off on tampon use for a while and that pads, while disgusting to comprehend, perhaps were the way to go. They did, however, use those mirrors to figure out that their bodies were equipped exactly the way I had assured them they were equipped, which was a relief to them.

But they did ask me to be sure and go to the store and buy a new box of tampons so that the next time they were ready for a “prep session” that they would have the supplies they need.

Twin tweens are better than just about anything when it comes to entertainment. And this moment, and the image of the two of them on that bathroom floor trying to figure this tampon business out? Perhaps one of the best parenting moments ever. Stay tuned, there’s more. There’s always more.