Defining Marital Status — Divorced, Single, and Does it Matter

Defining Marital Status — Why Does It Matter So Much 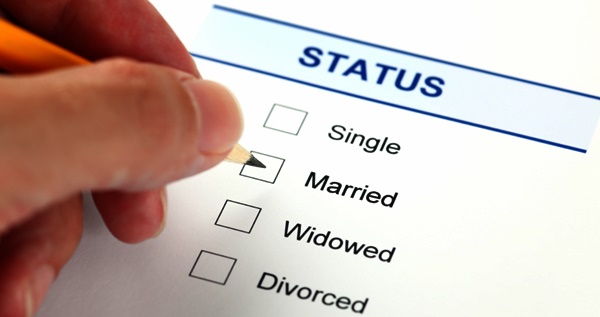 I’m divorced. But being divorced doesn’t define me. In fact, I consider myself single. In other words, I am not married, so I am single. And, this is where my pet peeve comes in. You know when you’re filling out forms, there are those little boxes where you are asked to indicate marital status? Think about that for a minute: What are we, living in the 1940s when women were property or something? Why does this matter so much? I think it’s time to upgrade our thinking, people. Or what about when you meet a stranger and he or she asks whether you’re single and/or if you’ve ever been married. That’s my pet peeve: Why the focus on defining marital status? Should marital status even matter except for when you’re filing taxes? I suppose it matters if you’re filling out a form and need to indicate next of kin or someone who is financially responsible for payment if that’s not you. But still, it seems as though we tend to go a little overboard on that whole defining marital status business.

If you’re single, this might have never been an issue you’ve faced, and I’m sure there are people who are divorced who don’t define themselves as single at all. As for me, I don’t define myself as a divorced person. And I’m wondering how the rest of the world, those many other people who are in my shoes, think— or define themselves—when confronted with those pesky boxes.

So, let’s talk about defining marital status and what I’ve already referred to as our apparent obsession, as a society, about that. Here’s a true story on that topic. Just the other morning I was at a new doctor’s office, filling out the hundreds of forms that are required before you can get any kind of medical attention. At the very top of the form, there were those three little boxes: Marital status: Single, Divorced, Married. I stared at those three boxes and contemplated checking off divorced and single, because when you’re not married, whether it’s because you are divorced or not, aren’t you just single?  I even got up out of my chair and knocked gently on the glass that separates those working diligently behind the muted frosted divider to ask them which box to check. And, although I was being a little snarky, I think I stumped them.

Here’s another one for you. I remember an instance that took place at the beginning of the school year, when parents are seeing lots of new faces, some of which we’ve not seen in a very long time. In this particular instance, one of those new/old faces walked up to me and said the requisite ‘hello’ greeting. Before I could even respond, this woman went on to say that she’s recently gotten divorced. I don’t know about you, but that’s not the type of greeting most of us are expecting, whether from a newly-made acquaintance or from someone we know but just haven’t seen in awhile. Any way you look at it, it’s kind of weird. She might have just as easily said “Hello, my name is Divorce” — that would have been about the same thing. I decided to give her the benefit of the doubt, though, as I figured that maybe the divorce was a new thing and that she was just getting her sea legs and figuring things out. That said, it was still weird.

But the real point I’m trying to make is this: I don’t know what it is that makes people feel the need to define themselves by their marital status. It seems kind of lame to me, and most certainly unnecessary. We are who we are. Single. Not single. Whatever. What’s the deal with this fixation on defining themselves in this way? Is it because they think you might have a friend hidden away somewhere to fix them up with? This woman at school dad not seen me in years, and yet it kind of seemed as though she sought me out specifically to say “Hello, my name is Divorce.”

What Are the Defining ‘Marks’ of Divorce?

I don’t make it a big secret that I’ve been divorced three times. I’m actually quite proud of the fact that I can live to talk about my experiences, but  last I checked I wasn’t wearing a big D on my forehead or a cape that had a D emblazoned on it, although that might be kinda cool. Being thrice-divorced is not who I am, but I can promise you the experience of being married, and divorced, three separate times, has taught me a ton. And it’s also helped me grow and has molded me into the person I am today. My marital status, or lack thereof, is something I am proud of. Why? Because it shows that I have been through the fire and made it out with just a few scars that are now all healed up. It shows that I can handle just about anything (or anyone) life throws at me, and that I’ll be just fine. It also shows that I know how to  handle pressure and adversity with grace and dignity.

Being a mother. My children who I see grow into caring and loving individuals who fight for the underdog and are becoming people who I am proud of.

Being a daughter. My mother, who taught me the value of saying I’m sorry and love and respect.

Being a sister. My brother who shows me every day what it means to continue to fight for what you want.

Being a friend. Those I surround myself with who have seen my at my worst and my best and love me both ways and always.

Being a woman. Appreciating what I have to offer this wonderful world I have the privilege and joy to live in and give back to.

7 Steps to Rediscovering Yourself After Divorce